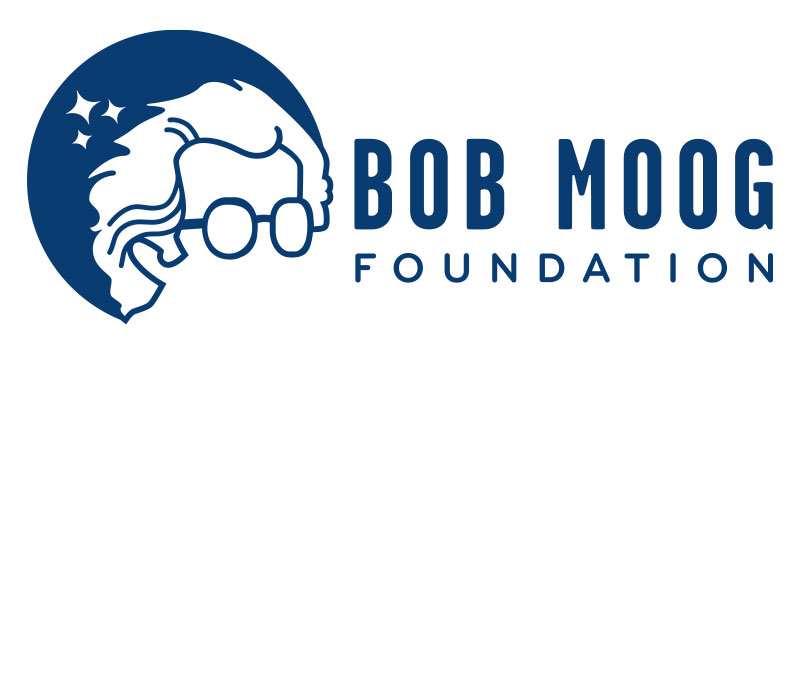 The BMF is this year’s Synthplex® charity

For Synthplex® 2020, all profits from the sale of Pop-Up Synth Museum tickets will go to the Bob Moog Foundation. At Synthplex®, we believe it is critical that we do our part in ensuring that music education is continued and well supported, both locally and nationally. We want to see the youth of today, learning & being excited about electronic music production and synthesizers. Part of our Synthplex® mission, is to raise money each year for a different charity organization. Annually we will donate these PUSM profits to an organization such as a music school or a music educational program, and to those organizations which are dedicated to furthering the musical education of our youth. Please buy a ticket to the PUSM and come check out our all new vintage synth collection for 2020. Everyone that bought a Pop-Up Synth Museum ticket last year, raved about what an amazing collection we assembled. This year will be just as incredible if not more so! We will have all different vintage synthesizers for 2020, and we cannot wait to announce these details as they are announced! 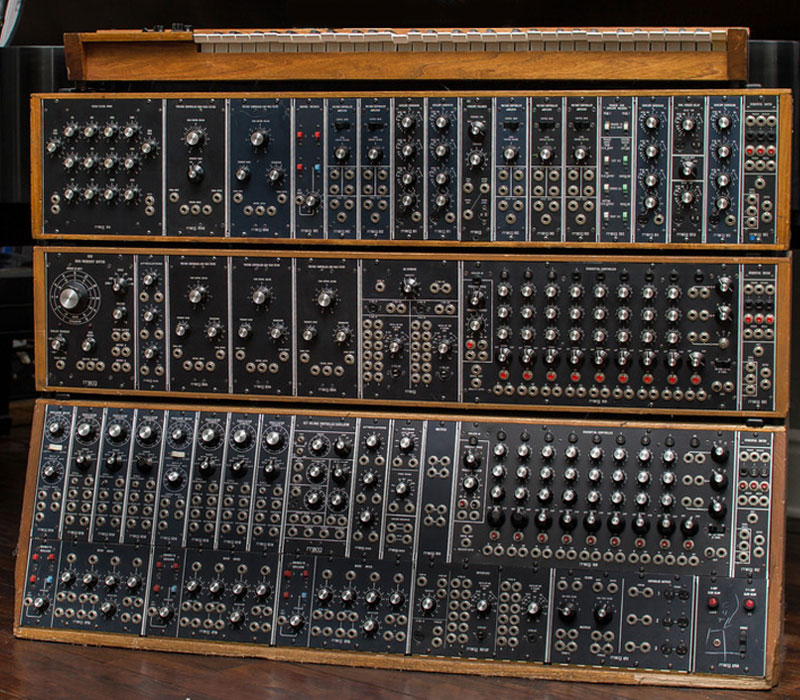 This Moog Modular was hand delivered to Los Angeles by Bob Moog himself sometime in 1974. Bob personally drove this synthesizer across country from New York, so he could personally make sure everything was right upon delivery. Michael used this massive synth on countless studio sessions including all of his sessions with Michael Jackson. His Modular 55 was patched & programmed by Michael Boddicker for the synth parts on Billie Jean and Thriller. It was also used for Donna Summers tracks, Finger on the Trigger and State of Independence. It was also used in recording sessions on several Laura Branigan albums, including her featured track, Imagination, which was in the 1983 smash hit movie Flashdance. This Boddicker owned Model 55 was designed and largely built by Bob Moog himself and it is a beautiful instrument to behold. Operation of the Modular 55 is quite musician-friendly as it features very straight forward input and output jacks and all the knobs are clearly labeled.

Thee voltage-controlled oscillator modules produce stunning tones and this unit has rather stable tuning once it is up to temperature. The real legendary Moog sound comes from the 24 dB/oct lowpass filter (the 904A). To this day, no one has come close to improving upon the original Moog filter and its patented ladder design. Additional modules include VCAs, envelope generators, highpass filters, equalizers, noise generators, a sequencer, and utilitarian modules such as audio mixers, control voltage processors and power supplies. There is no dedicated LFO module, however. Instead, one of the VCO modules has a rate slow enough (0.1 Hz) that it can be used as an LFO instead of a sound source. 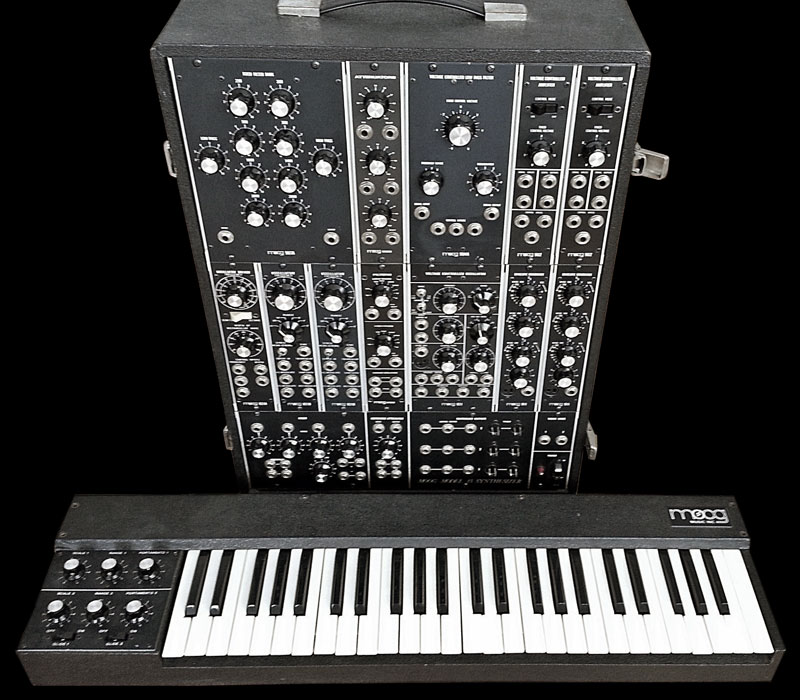 The Moog Modular 15 was built from 1973 to 1981 and it was a complete studio synthesizer in a portable package and this smaller size allowed Michael Boddicker to have this unit delivered easily to various studio sessions while his larger Modular 55 was being packed up at another session across town. The model Modular 15 was also the introduction of the new 921 series oscillators. These revised VCO 921 modules provided more stability with the tuning. The legendary Moog sound truly comes from its 24 dB/oct lowpass filter, which is the 904A module. To this day, no others have come close to improving upon the original Moog filter and its patented ladder design. Give this Model 15 a test drive and see for yourself why this is such a beast in a small package.

Michael used this Modular 15 on Lionel Ritchie’s session for You Are. It was also used heavily on the Cheap Trick albums including, On Top Of The World and Surrender. 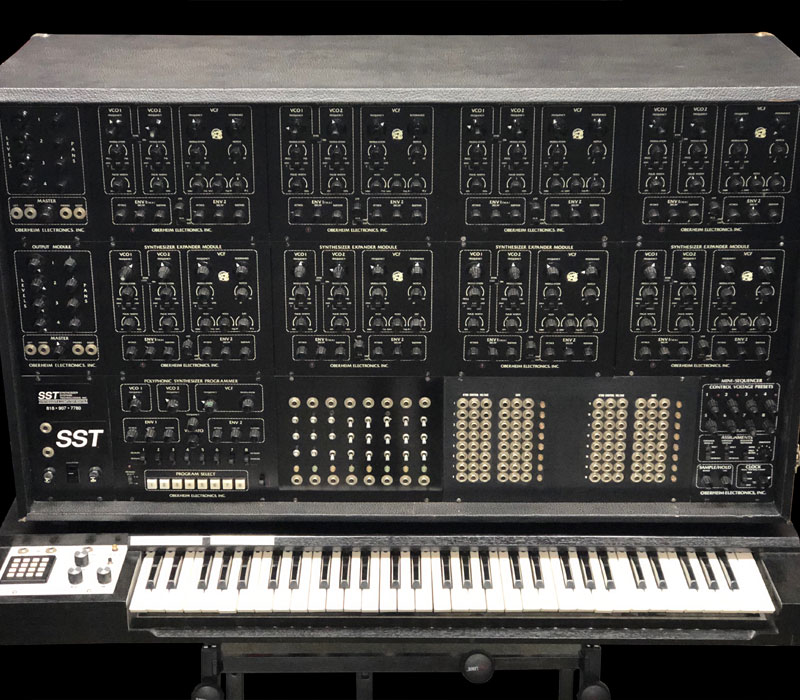 This is one of Michael Boddicker’s favorite synthesizers that he owns, and this Oberheim Eight Voice is “super fat” and has eight separately controllable voices and it is a true vintage classic synth designed by the legend himself Tom Oberheim. Originally this unit was owned by Yes and Moody Blues keyboardist Patrick Moraz.

The Eight Voice is essentially eight (8) SEM modules stacked together alongside the Polyphonic Synthesizer Programmer for patch memory. It also featured a simple analog mixer, and a 49-note keyboard. The Oberheim Eight Voice gives you an eight-voice polyphonic/ polytonal synthesizer with 16 VCO's, 8 VCFs, 16 ADR envelope generators and more. Because the Eight Voice derives its polyphony from having eight mono-synth modules hard-wired together, this delivers some pros and cons. What is incredible about this design, is that all of the 8 voices could be played simultaneously and when this sound was introduced, there was no mistaking it for anything other than an Eight Voice Oberheim. You also had the ability to design a different sound on each of the eight-voices and that led to some incredibly unique and complex sounds being generated. The downside was that it also meant you had to program each of those voices independently and this could be time consuming work. Fortunately, the on-board Polyphonic Synthesizer Programmer could store up to 16 patches per voice so that you could save your programs without losing them, which made this a valuable tool that Michael Boddicker used in his large stable of synths for studio sessions.

The Sequential Circuits Prophet 5 is one of the most iconic synths from the late 70's. It is one of the first fully programmable polyphonic analog synths and the Prophet 5 was the sound of the eighties! It is a very capable synth that had a unique analog sound The Prophet 5 had five voice polyphony, two oscillators per voice and a white noise generator. The analog filters, envelope and LFO all sound great and are extremely flexible. The Prophet 5 has on-board patch memory which scanned and memorized every knob setting for storing and recalling your sounds. This was a huge step forward at that time!

This is a Rev 2 model using the SSM chips, and has some differences in its control logic capabilities from the final version. This Rev 2 model is considered by most to be the better-sounding of the two 'common' P5s. 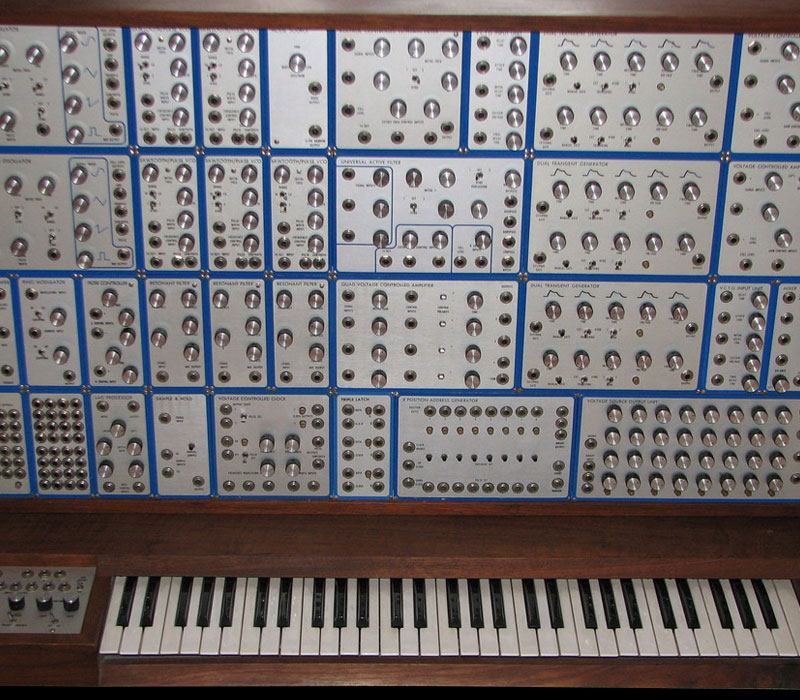 E-mu Systems got their start from very humble beginnings in the early 1970's and they were based out of Santa Cruz, California. Founder Dave Rossum and a few of his friends made their first E-mu synth called the E-mu 25 in 1971 and only two were made and delivered. In 1972 they started building the E-mu Modular systems and they produced just over 250 of these modular synthesizers for famous artists, such as; Herbie Hancock, Hans Zimmer, Frank Zappa and Michael Boddicker to name but a few. They were also sold to several universities for their budding electronic music programs. These E-mu modular synths were all custom-assembled and they became known for their remarkable stability and these synthesizers were sturdier and would stay in tune longer than competitive models offered by Moog and ARP at the time. The E-MU Modular featured the world's first microprocessor-controlled polyphonic keyboard and sequencer (control voltage, of course, as this was years before MIDI), which was also one of E-MU's first patents. The E-Mu modular system is a true modular system, but it also featured a “firm-wire patch” in which any front panel patch could be made in the rear of the instrument. Inserting a front panel patch would then bypass the firm-wired patch, so you could store a favorite voicing or frequently used connections by using this unique firm-wire patches. These firm-wire patches were not permanent, and they could be easily changed by the user.

It is believed that today, there are less than 100 or so of these E-mu Modular synths still around. Notably these E-mu's oscillators were virtually drift-free because of E-mu's unique circuitry designs. Their filters were also cleaner than the Moog and ARP, however that wasn't always considered a good thing, because many people liked the grittier sound of a Moog Modular. 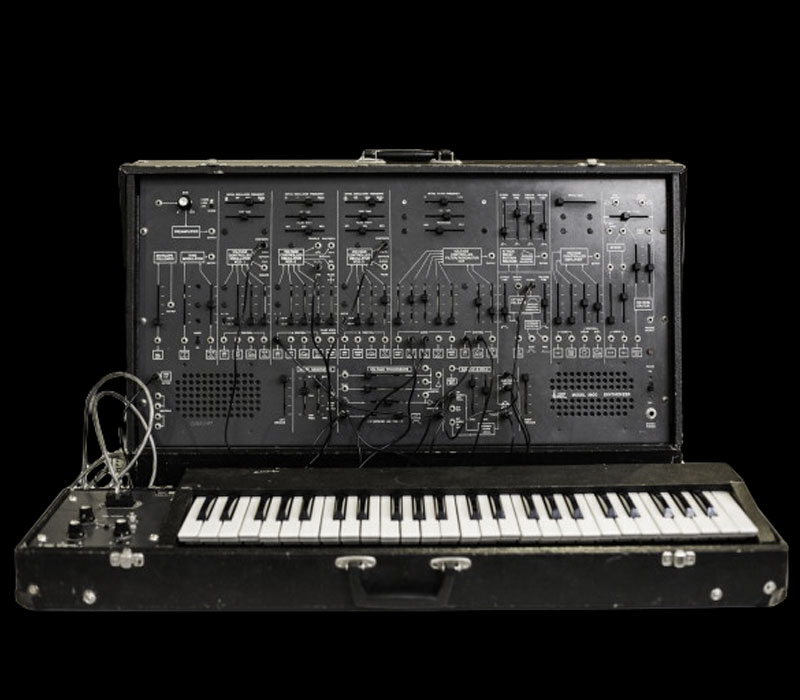 The ARP 2600 is beyond a doubt one of the finest analog synthesizers ever produced and it has been used in all genres of music with a lot of famous artists. The ARP 2600 is a unique semi-modular monophonic synthesizer that was designed for professional musicians, but was also user-friendly enough to be used as a teaching instrument. In fact the 2600 was used in a lot of college music departments and it competed directly against the Moog Modular synthesizer. The 2600 was ARP's answer to the modular system, creating a more compact, more stable and more intuitive synthesizer.

While most modular systems of the time were custom ordered and built to the buyer's specification, that flexibility often came at a high cost, both on the wallet and the brain. Instead of picking and choosing from a catalog of individual modules that you (or the manufacturer) then had to mount inside a case and wire together, the 2600 is a semi-modular system with a fixed selection of basic synth modules internally pre-wired and ready to go! Most of these connections can be "re-wired" with patch-cords at clearly labeled patch-points. This made the 2600 more user-friendly, portable and easier to create sounds with.

The 2600's basic architecture consists of a complete analog signal path with three oscillators, one 24 dB/oct filter, one ADSR envelope, one VCA and one mixer section. Additional features include an envelope follower, ring modulator, noise generator, LFO with sample and hold, built-in spring reverb and a pre-amplifier with stereo speakers.

The ARP 2600 was produced from 1971 to 1980 and the 2600 was built in four model generations, with each model being a little bit different, some with changes due to reliability issues, some due to legal issues, and some for cosmetic reasons. It's accepted that while the 2600s became more reliable and serviceable as their production progressed, they also got worse in the sound quality department, especially among models made after 1972. The best sounding models are the oldest ones and the most rarest.