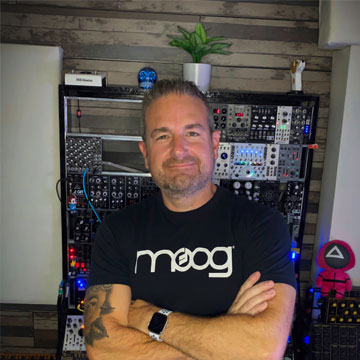 He has music in over 26,000 episodes on television shows around the world including NAVY NCIS, Impractical Jokers, American Idol, America’s Next Top Model, Real Housewives of Orange County, Access Hollywood, E! News Live and Good Morning America; has created original scores for networks ABC, CBS, Discovery, Lifetime, Bravo, and more; worked with advertisers such as Progressive Insurance, V8, and Dr. Pepper, and written video soundtracks for Insomniac Games like Feral Rites. He recently wrote the Theme song “Everybody Get Gronk'ed (Shirts Off to That!)” for Superbowl Champion Rob Gronkowski. And was nominated for a OMA award for producer of the year. Also just finished feature film and a short film as well.

Jack has produced for award-winning songwriter Diane Warren for eight years and produced and wrote with superstar David Foster as well as a in-house composer for Reality TV Megastar David Vanacore. With an incredible ear that closely follows the ever-changing current sounds, Jack has his finger on the pulse of today’s music and displays an uncanny knowledge of translating the trends into what the various avenues of the industry need.

As a board member for the Society of Composers and Lyricists, Jack plans and hosts educational seminars in Los Angeles covering a range of subjects relevant to media composers. He is also actively involved in organizing the SCL’s annual Oscar and Emmy receptions, the inaugural SCL Awards, and writes product reviews for The Score magazine.

Jack had the high honor of collaborating with 14-time Grammy Award winner David Foster, writing and producing "I Want to Be A Millionaire" for ABCs mega-hit Who Wants to Be a Millionaire featuring host Regis Philbin. He wrote and produced #1 single in Hungary for superstar Gigi Radics “Over You”. With the #1 slot on Billboards dance radio chart, Jacks remix of Nick Lacheys "Whats Left of Me" (Jive Records) has taken radio by storm. Jack had the #2 Billboard dance single of the year for recording artist Reina (Robbins Entertainment), with the anthem "If I Close My Eyes" co-writtern with dance legend Janice Robinson. Jack repeated the magic with another #1 Billboard smash "I'll Be Your Light" for world-renowned diva Kristine W. Co-written with John DeNicola of Dirty Dancing.

On top of loving music. Jack’s has rescued over 35 Greyhounds from the Tijuana and Florida racetracks and found forever homes for them.

Jack D. Elliot will teach and demonstrate the amazing capabilities of Granular Synthesis in Ableton live. For the demonstration he will be using Max for Live Granulator II. There will be fun examples and some history behind were Granular synthesis came from.