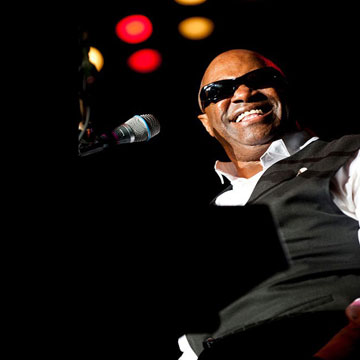 When it comes to music, Ellis Hall does it all. He is a seasoned and accomplished vocalist in possession of a powerful 5-octave range. He is a songwriter, arranger, producer and educator that teaches clinics in which he records all the parts of a song in 45 minutes. Ellis' first instrument was drums before he went on to master piano, keyboards, guitar and - his favorites - upright and electric bass. Across a career of 40-plus years and counting, Ellis Hall has proven himself as an all-around performer that has entertained audiences on five continents, sharing stages with giants ranging from James Taylor, Natalie Cole, Patti LaBelle and Toby Keith to Herbie Hancock, George Benson, Bobby Womack, George Duke and Sheila E. Ellis finally met his greatest inspiration, Ray Charles, in 2001 at a Christmas party. "Papa Ray" signed Ellis to his CrossOver Records label in 2002, mentoring him at his famous RPM Studios. His reputation of excellence earned Ellis the moniker, "The Ambassador of Soul."

Ellis did his first symphonic concert in 2005 at the Hollywood Bowl and has since been playing with prestigious 81-piece orchestras internationally, including the Pittsburgh Symphony and many others.