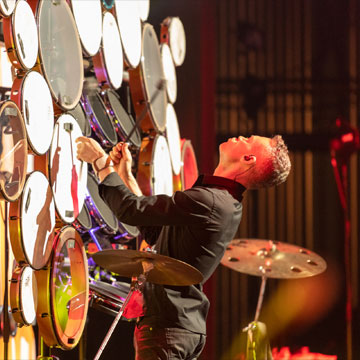 Drumdala is an audio-visual performance group specializing in a fusion of tribal, modern dance, and cinematic styles.  It is based around a unique instrument designed by Richard Sherwood called The Drumdala- mandala of drums.  This instrument is a blend of acoustic and tonal electronic drums which can loop and layer a vast array of sounds.

The design inspiration for the instrument comes from the Taiko drumming tradition, early electronic drummers, DJ culture, and visionary instrument inventor William Close. Richard has performed around the world with Mr. Close's Earthharp Collective for the past 15 years.  The drumdala is an evolution of Mr. Close's drumcloud with the latest electronic looping technology.