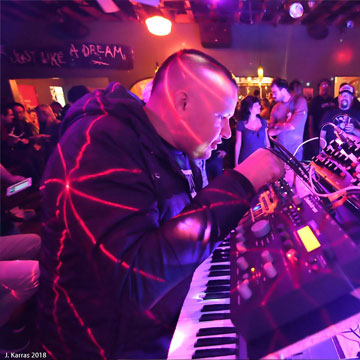 Growing out of the live electronic, no computer, underground scenes of San Diego, Tijuana, and Los Angeles, synthesist Luis Murillo first got hist start co-organizing Southern California's longest-running open mic for electronic musicians. From 2015 and on, he took on the moniker Delta-Sine, curated and performed at several renegade raves from Baja California to Los Angeles, and has since then shaken warehouses in Mexico City, Berlin, Toronto, and Montrea

The following year, Delta worked with Inhalt's Matia Simovich to mix a variant version of Delta-Sine's third full-length album, Delincuentes. This time, using classic analog machines such as the Roland Jupiter-8, TR-808, TR-909, LinnDrum, Prophet-5, Pro-One, and Emulator 3. The goal was to remake "Delincuentes." with a cold-wave aesthetic, yet with a Tangerine Dream quality, this can be heard in the tracks Egoista and Delincuentes. In 2018 during his european tour and 1-month residency in Berlin, he composed nomadic space disco album Analogue Zigurat.

Most recently, he's released 'Vulcan Love' a melancholic synthwave triphop album, written during the 2020 pandemic, and is currently available in a limited 180g vinyl through his own Tijuana-based, The Great Equalizer, Electronic Synth Label.