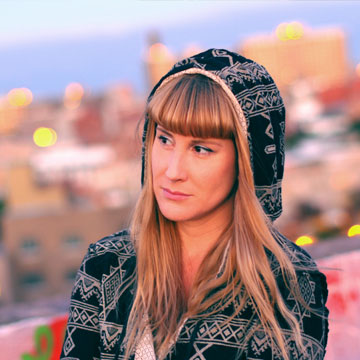 Praised by VICE Magazine as the "mistress of new music" and named as one of their Artists to Watch by The Fader, Lorna Dune has been turning heads since her foray into the world of electronic music production She has worked side by side with the great Minimalist pioneers while fueling her Midwestern 90’s techno roots by embracing Brooklyn’s thriving underground dance scene.  Her new take on weightier polyrhythmic ambient dance music is both fresh in its approach to the genre and also a unique arrival through her journey of sound.

As an experimental keyboardist & music producer, she is the founding member of the quintet Victoire with composer Missy Mazzoli, collaborates with electro-punk feminist icon JD Samson as well as artists Steve Reich, Meredith Monk, the Philip Glass Ensemble, William Brittelle, Tristan Perich and more. She has received commissions to celebrate Terry Riley’s 80th birthday, remix British composer Max Richter for Deutsche Grammophon as well as remix the Pulitzer Prize winning work by Caroline Shaw covered by the New York Times. She has appeared at the Whitney, MoMA, New Museum, Carnegie Hall, Benaroya Hall, Millenium Park, BAM and more throughout the US, Canada, and Europe.

“An experimental keyboardist who is happy to go wherever her heart and ears tell her, redefining genres along the way, Lorna Dune inhabits a world of her own, and it’s a glorious thing to behold.” – Red Bull Music Academy