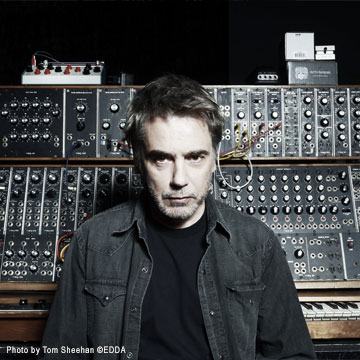 Composer, performer, producer. Visionary, innovator, cultural ambassador. Any list of Jean-Michel Jarre's countless factettes would come short of his actual significance in music history. “JMJ” is a living legend and often referred to as the “Godfather of Electronic Music”. When Jarre launched his landmark- debut album “OXYGENE” in 1976, he opened a new chapter in music history. The record has sold over 18 million copies and laid the foundations for his exceptional career.

Balancing between the spheric-abstract and the very direct melodic foundations of his music, Jarre manages to evoke the poetry of encounter and connection: between people, between handmade and high-tech, between organic and artificial, between wisdom and vision.

Jarre’s pioneering work gave birth to a veritable cult at the beginning of the fastest-growing trend the music industry has ever stood to witness: the rise of electronic music.

Almost five decades later Jarre is as relevant as ever. In 2017 Jarre, who has sold more than 80 million records throughout his career, was nominated for a Grammy for his bestselling album “ELECTRONICA 1: THE TIME MACHINE”.

With technology on the forefront on everything we do, Jarre quotes today as “the most exciting time to make music”. With his first memoirs to be released in the autumn and a mind full of new ideas for music projects it is only question of time for Jarre to surprise us with a brand-new technology driven, exciting studio release.

Synthplex is honored to present Jean-Michel Jarre with The Synthplex Golden Ear Award.

We are honored to have Jean-Michel Jarre give the keynote presentation on Saturday, 28th. He will be personally interviewed by Synthplex's co-founder Michael Lehmann Boddicker.