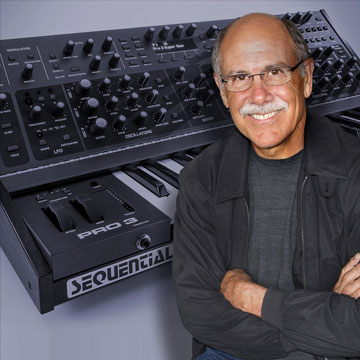 Legendary instrument designer and Grammy-winner Dave Smith founded Sequential Circuits in 1974. In 1977 Dave designed the Prophet-5, the world’s first fully-programmable polyphonic synth—and the first musical instrument with an embedded microprocessor. Sequential released many innovative instruments and drum machines over the next 10 years. Dave is known as the driving force behind the MIDI specification in 1981. It was Dave, in fact, who coined the acronym. In 1987 he was named a Fellow of the Audio Engineering Society (AES) for his continuing work in music synthesis. After Sequential, Dave was President of DSD, Inc, an R&D division of Yamaha, where he worked on physical modeling synthesis and software synthesizer concepts. He then started the Korg R&D group in California, producing the Wavestation and other technology.

He took over as President at Seer Systems and developed the first soft synth for Intel in 1994, followed by the first professional soft synth, Reality, which was released in 1997. Realizing the limitations of software, Dave returned to hardware and started Dave Smith Instruments, starting with the Evolver hybrid analog/digital synthesizer in 2002. The product lineup has grown to include the Prophet X, Prophet Rev2, Prophet-6, OB-6 (with Tom Oberheim), Pro 2, and Prophet 12 synthesizers, and the Tempest drum machine (with Roger Linn). In 2018 DSI changed its name to Sequential, bringing Dave’s legacy full-circle.

The new Pro 3 monosynth from Sequential comes in a standard version and a Special Edition. Dave will go through the operation and features of the Pro 3, and of course demo the sound. In addition, Dave will leave time for general Q & A, so come up with some interesting questions!