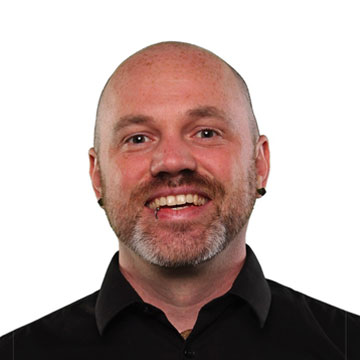 Austin got his first job in radio because he ran sound for the church he grew up. While he was a classically trained guitar player he liked putting effects on his guitar more than he liked practicing. After getting a degree in Production from MTSU he went to London to work in a studio to pursue his fascination with jungle. He moved back to the Nashville area to manage a rental company so he could run sound systems and have a finger in the parties in the college town he'd left. He moved to Indiana to design studios and sound systems as a Sales Engineer at Sweetwater Sound. He's currently the DJ, Keyboard and Synth buyer at Sweetwater where he also teaches classes in Sweetwater University on Keyboard Terminology, Connectivity for Electronic Musicians, and Eurorack and Modular Synthesizers. He got into eurorack while pursuing DIY interests. A techno producer friend drug him to Knobcon where he got a demo of the DPO and ErbeVerb from Make Noise's Tony Rolando and he was hooked. He loves connecting modules with each other almost as much as he loves connecting people with new tools, allies and concepts that facilitate the exploration and enhancement of sound

Whether you're euro-curious newly committed we'll consider the overlooked aspects of rolling your own modular system and how to get what you expected out of your burgeoning system. Basically, all the expensive mistakes I made laid bare and the pitfalls I avoided with the help of friends, mentors and manufacturer partners.