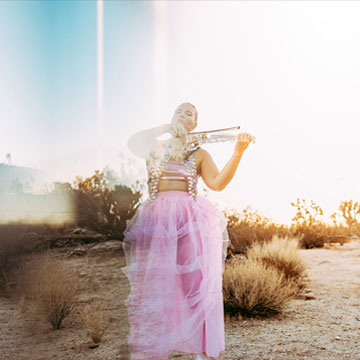 From technology to artistry to production to live show design to wellness, there are few people who understand the complete spectrum of the music industry. Laura Escudé is one of these rare individuals. As an performing artist, Laura Escudé executes this mission through her music. She has released a myriad of albums, singles and EPs under the name Alluxe, synthesizing her skills as a classically trained violinist and her prowess as an avant-garde electronic producer. Now making music under her own name, Escudé recently released the Transmute EP, her most intimate work to date, capturing the sound and feel of a woman who’s examined the darkest parts of herself and come out the other end transformed. Escudé’s live performances are known for their sleek futuristic style and the raw emotion she elicits from her musical machines. She’s done official remixes for artists including M83 and Polica, with her stellar violin playing is featured on albums by Big Grams, Kanye West, Jay Z and many more.