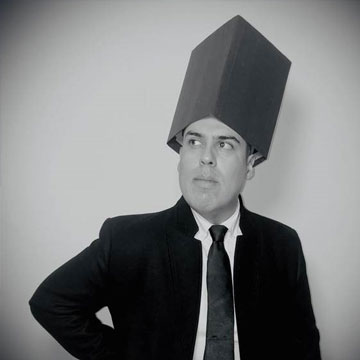 Ego Plum is a cartoon composer, songwriter, performer, and self-proclaimed absurdist. Although he did not go to music school and can’t read nor notate music, he became the only composer in Nickelodeon’s history to score a cartoon with a 50-piece orchestra (Harvey Beaks 2016).

The influence of cartoon music masterminds Carl Stalling, Raymond Scott, and Hoyt Curtain are evident in Plum's work. And equally present is his love for the avant-garde and punk rock. As a result of this unlikely combination, his compositions often contain head-scratching instrumentation. If you visit Plum’s musical world, don’t be surprised to hear drum kits made from discarded car parts, Puerto Rican cuatros, malfunctioning Casio keyboards and children's toys, all in collusion with orchestral instruments.

Plum is a staple at Nickelodeon and has composed for “Making Fiends,” "Harvey Beaks,” “Welcome to the Wayne,” and the forthcoming Nick Jr. series “Santiago of the Seas." Most notably in 2019, Plum was asked to bring his peculiar sensibility to the Emmy Award winning series, “SpongeBob Squarepants,” one of the most successful shows in animation history.